There are more cultural venues and events in Guanajuato than I can list, but below is a beginning. I’ve included a new venue (Casa Cuatro) along with some old favorites. I made links for additional information when I could. 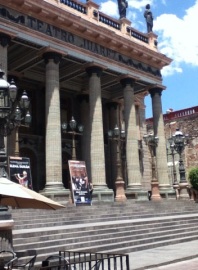 You’ll find sandwich boards or posters announcing upcoming events on the stairs of the Teatro Juarez, in the Jardin de la Union, at the Teatro Principal, and by other venues.

A mime performs weekends for crowds sitting on the Teatro Juarez stairs.

You can dance or watch on Friday evenings in the Plaza San Fernando and on Sunday afternoons at the Presa de la Olla.

Jardin de La Union. At the Kiosk on Tuesday evenings before dark, a live band plays cha-cha, mambo, danzón and other music for dancing.

On Sundays midday the State band plays at the Kiosk. There are also various street musicians playing at the plaza side restaurants, including mariachis and norteños. On weekend and holiday evenings, roving musicians, the estudiantinas, pass through the Jardin on their way around Guanajuato’s colonial center.

Casa Cuatro, San Jose #4, Centro, Guanajuato (a block up from the post office) hosts chamber or jazz (usually 7PM Saturday evenings), monthly readings in English and Spanish (October through May), and various other cultural activities. To stay up-to-date with their events friend them on Facebook.

Pretend you’re in the South of France and have brunch, lunch, or dinner at Casa Cuatro’s El Midi.

El Viejo Zaguán. Calle Positos 64. Art openings and other events in a beautiful colonial building. Shop for crafts, music, art, and books. Nibble Mexican wedding cookies in their Patio Café. To learn of their events, friend them on Facebook. Co-owner Ana’s father paints replicas of crowned nun portraits. Does this nun look dubious about being cloistered for life? 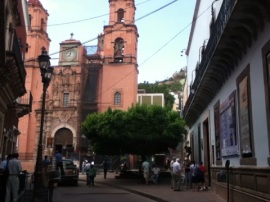 For The University of Guanajuato’s professional symphonic orchestra (OSUG) performances, check the sandwich board in the Jardin de la Union or click here. As a rule, concerts take place during fall and spring semesters on Fridays at 8:30 in the Theatro Principal.

In the Auditorio Euquerio Guerreo, off the patio to your left, the University of Guanajuato’s Cine Club presents national and international films Sunday through Wednesday during the spring and fall semesters. For more information, click here. Then click “Cine Club.”

Festival Internacional Cervantino. Every October. The program usually comes out in June. Click here. Nineteen days of art, music, drama. dance, and literature. Performances and exhibits in numerous venues. Street performers of all sorts, too. Something for everyone. And some weekends it seems everyone got the message. The two streets through Guanajuato’s historic center become so packed with pedestrians that police close them to traffic. Youth stay up all night in the plazas. Some locals hibernate or leave town. But this small town girl from Missouri cherishes every minute.

Museo Casa Diego Rivera, click here. Diego Rivera was born in Guanajuato. His parents left a few years later, and took him along. Rumor says his father was too liberal for conservative Guanajuato. Diego would have been, too. Nonetheless a museum eventually opened in his family home. You’ll find funiture of the period downstairs and galleries devoted to his art upstairs. Films are sometimes shown in an upstairs auditorium. Occasional art openings of temporary exhibits. A new wing opened recently with another collection of Rivera’s work.

Museo Regional de Guanajuato (Alhóndigas de Granaditas), click here. Built around a huge interior patio, the stone building was the site of an early battle in Mexico’s war of independence, when Father Hidalgo and an army of peasants and minors stormed the building. A minor, called “El Pipila” reportedly covered his back with a slab of stone and crawled to the wooden doors to blast them open. He died, but his imagine lives on in gigantic sculpture on the hillside west of the Jardín. The museum houses exhibits of pre-hispanic seals, Chupícuaro pottery, mining history, history of the revolution, and Hermenegildo Bustos portraits. You’ll find somber busts of Father Hidalgo and three other early heros of the Mexican revolution. After capturing and killing them, the Spanish placed their heads in metal cages and hung them from the four corners of the Alhondiga. Stairway murals by José Chávez Morado depict the hanging cages and other dramatic events of Mexican history.

University of Guanajuato Day of the Dead

Museo del Pueblo de Guanajuato, click here. On Positos, left of the steps of the central building of the University of Guanajuato. Occasional concerts in the Museo’s upstairs chapel, so small that half the typical audience cannot fit inside. Also permanent and temporary art exhibits. Banners announcing temporary exhibits hang on the side of the building.

Museo de Arte Olga Costa – José Chávez Morado, click here. Pastita 158. Exhibits of their work in the home where they lived. Their ashes are buried in their garden, in pots planted with the succulent siempreviva.

There are more performance venues, including a large, modern performance hall, Auditorio del Estado, normally a 15 minute drive from the center, though no chance of that during the Festival Cervantino.

There are also more museums, including the Museo de Las Momias de Guanajuato, which to Mexicans is the best known of them all. (Say you’ve been to Guanajuato, and their first response will be: Did you see the mummies?) I have not been inside the museum myself, but did see a mummy one day up at the Pípila monument, where it had been taken for an outing. If you die and are buried in the mummifying soil of Guanajuato, you, too, can become a mummy. Though your status may be mistaken by a hapless, English-speaking tourist, that is, unless the guidebook I happened onto is not typical. In that one “Las Momias,” was translated as “The Mommies.”